Learn about how football coaches and analysts use Spiideo

Used in the right way, video is an invaluable feedback tool in football for improved communication, and increased efficiency in the coaching process. However it also comes with many challenges. Read and watch the video on what some of our customers think Spiideo helps them with in the daily work with video capturing analysis.

No more struggle with technology, everything is captured

Axel Kjäll is an assistant coach at Örebro SK, and have now used Spiideo for about a year.

“Before we got Spiideo, the biggest challenge with using video in football for me, was lack of time, to get good useful pictures and have someone to organize everything,” Axel says

This has changed a lot since they got Spiideo. Now they record everything and use it across the whole club. All coaching staff and players have access and can watch practices and matches on their iPads and/or iPhones.

“One of the best things for us with Spiideo is that it is really easy to use. Everyone can use it, and you always have it with you, you can always watch it. Since everything on the pitch is captured and saved, you never need to worry about missing a situation”

When it comes to matches, Axel used the videos both before and after the matches, but also during the match in half time to e.g. give quick feedback to the players regarding set pieces in order to make small adjustments to the play. 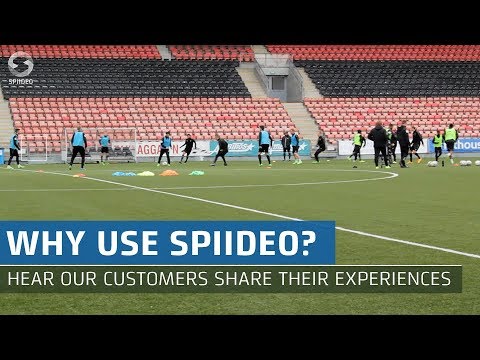 Making video a part of the everyday work process

“I think the video really helps us with the feedback and helps us develop players because we can be more objective, we can have the same pictures as the players have. Now when we are using Spiideo, it’s a lot easier, and it is a tool that helps us with the everyday environment,”

The challenge before Spiideo was that the process required a lot of manual work. Someone needed to organize the camera set up before the sessions (with fresh batteries, cables etc), and keep track of when to start and stop etc. The next step was to import the video to a computer to cut and edit, export and organize and share with the coaching staff. After that, they needed to cut and edit again to show the players etc. All this is now simplified a lot.

We can use it every day for training sessions. and it’s only to press the record button and you are on. You can show the players directly after things happened, or after sessions as I usually use it”

The Swedish first and second league (Allsvenskan and Superettan) are now equipping all the home arenas with Spiideo systems. Stefan Lundin, Sports Director at the Swedish Football League (SEF) , sees this as a great way to further strengthen video capture and analysis to be a part of the daily routine and work process – both for Individual and team performance development and in particular for academics and young players

Players today need to see for themselves what happened, not just hear it from the coach”, Stefan says

Learn more about Spiideo solutions for football at: https://www.spiideo.com/sports/football-video-analysis-software/

Any cookies that may not be particularly necessary for the website to function and is used specifically to collect user personal data via analytics, ads, other embedded contents are termed as non-necessary cookies. It is mandatory to procure user consent prior to running these cookies on your website.

Undefined cookies are those that are being analyzed and have not been classified into a category as yet.

Analytical cookies are used to understand how visitors interact with the website. These cookies help provide information on metrics the number of visitors, bounce rate, traffic source, etc.

Advertisement cookies are used to provide visitors with relevant ads and marketing campaigns. These cookies track visitors across websites and collect information to provide customized ads.

Performance cookies are used to understand and analyze the key performance indexes of the website which helps in delivering a better user experience for the visitors.